They took away myopathy without numbing me 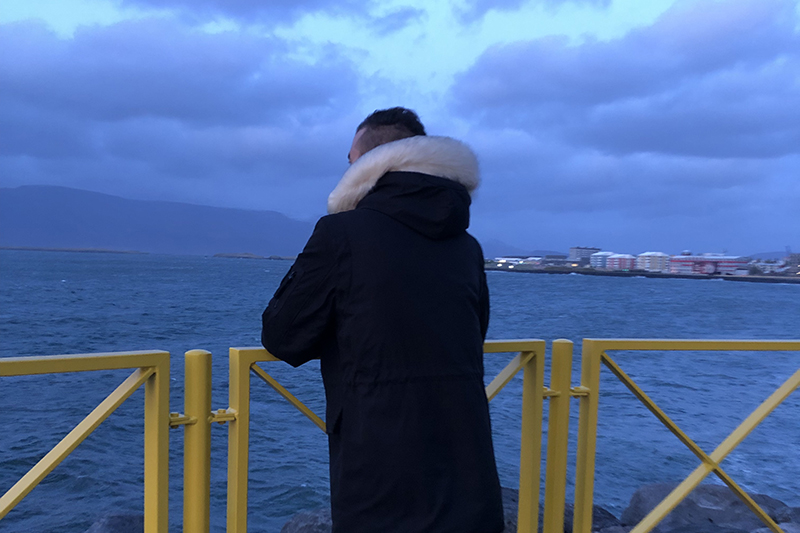 The Icelandic healthcare system is not perfect, and there still is in many ways room for improvement. But we often forget, in the broader context, how fortunate we indeed are. Living in Iceland is a privilege not to be taken for granted. Of course, there is still a lot that can be done to improve our healthcare system, but there is also already so many good things to consider. Achraf Hassar, a 27-year-old male from Morocco, is here to remind us of that.

Achraf first came to Iceland in April 2015 to study Geography at the University of Iceland. He has been ill his whole life; however before arriving in Iceland, his illness had never been properly diagnosed. Achraf has myelodysplastic syndrome (MDS). It is technically not cancer, but Achraf says his doctor told him that after 2-3 years, it could develop into cancer. His doctor tells him he was most likely born with the disease. And most likely received it from his parents. However, neither of them are ill, nor are his siblings. The symptoms manifest themselves so that he is always tired, sad and ever sick.

„In 2016, I was in a coma for two weeks. It was then that they found out what the problem was. I got a fever, maybe 42 degrees and suffered lung infection. I was exhausted and very sick, and after that, I can not remember anything. When I woke up, my friends told me that I had been in a coma for two weeks. After that, I spent a month in the hospital.“

When asked about the healthcare system in Morocco, Achraf says: „It is very, very bad. For example, it were the doctors here in Iceland who found out what was wrong with me. But in Morocco my mother spent a lot of money, I do not know how much, but the doctors there found nothing. They were always lying, telling my mother to give me some food to eat and then I would be fine. That maybe this was a problem with my stomach. No one told the truth. My mother was always taking me to the hospital, maybe a couple of hundred times.“

Achraf recalls a traumatic event that still haunts him: „They once took a bone marrow sample from me without giving me anaesthesia. I was eight years old, and I will never forget this. The pain was unbearable. I still feel the pain just thinking about it. There were six of them holding me down during the biopsy. Afterwards, they called my mother and said that they would have to do this again because they only got blood, but no bone marrow. I told my mother that I would rather die than go through that again.“

Achraf is much more satisfied with the healthcare service here in Iceland. „Here, they take good care of me. They give me regular appointments, and they use anaesthesia. In Morocco you might have to wait more than six months and up to a year, to see a doctor. Here I have yet to encounter any problem with communication. I always get a translator before any operation, and they make sure that I understand completely everything that is going on.“

Dreams about living in the countryside

Achraf quit school when he became ill and has not been able to attend school since. He is very lonely as he cannot interact with many people because of his suppressed allergic system. He is waiting to finish his treatment so he can go back to work and even finish his studies, when ready. He does not want to move back to Morocco at all because he fears to get sick again and to have to seek medical care there, as he knows that healthcare workers there are not doing their job properly. He says, „If you get sick in Morocco, you die.“

He would like to learn Icelandic, but he had begun studying Icelandic at Tækniskólinn before he fell ill. He dreams of changing his environment and moving somewhere to the countryside. Somewhere close to nature, he says, where life is quiet. But as things are at the moment, he needs to be in Reykjavik, where he is close to the hospital.

Achraf misses his family very much, as he has not seen most of them since he came to Iceland. He longs to travel back home to Morocco to see them. His sister however came and visited him in Sweden when he went there for a bone marrow transplant. „It has been challenging for me to go through all of this, alone and without my family. For example, when I was in the coma here in Iceland, my family didn’t know anything. My friend sent my sister a message and told her. I had previously been sent to France for observation in 2013, and he asked her about that. They needed my medical history here in Iceland, so my sister called the hospital in France and asked them to send her this information, which they did. She then translated it into English and forwarded it to Iceland.“

He appreciates the company and the support he receives from Kraftur. „At Kraftur you meet people in a similar position and with shared experience. I wish they had such an organization in Morocco. “

Let us be reminded by Achraf’s story, to be grateful for the privileges that we enjoy here in Iceland, at the same time as we try to do better ourselves.